Suppose Houdini had Jackson Pratt drains… did he levitate them when changing clothes?

The clever duo of Drs. Fredrick E. Jackson and Richard A. Pratt invented the Jackson-Pratt (JP) drain – a simple, yet critical tool for post-surgical patients. Basically, it’s a two-part plastic suction bulb with tube that draws unnecessary fluids from a surgical area. The invention came on the scene in the early 70’s, when the two surgeons worked together at the Naval Hospital in Camp Pendleton CA.

Drain tubes extend from the wound area as a sort of freeway for fluids to flow from body to a bulb container. At the other end are the bulbs, containing fluid. Typically nurses recommend patients suspend bulbs by clipping them to clothing with a safety pin. In a Rubik’s Cube kind-of-way – during clothing changes – a patient unclips, clips and re-clips the bulbs – in a very labor intensive manner.

Since the device’s introduction almost 50 years ago, a mystery remains – is there a simple way to manage JP drains?

Mystery solved – a pocket with ties

Maybe as early as time began, aprons have served a valuable purpose. From harvesting crops to blacksmithing, to even cooking in the kitchen. The KILI Medical Drain Carrier is a mesh apron designed to hold JP drains for the patient. Essentially, a pocket with ties. And because it’s made of mesh, it conveniently travels with the patient into the shower when bathing. 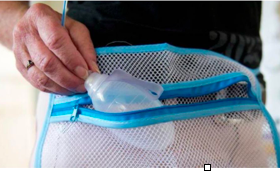 A drain in the hand is worth two in the pocket

So. Much. Easier. Drain bulbs no longer need to dangle off the patients body like a piñata at a birthday party. Or even be deftly juggled during wardrobe changes. Instead, the KILI Carrier holds up to four bulbs within the pocket. Tucked safely inside -with a zipper closure – there’s no risk of tubes being torn from sutures, or bulbs pulling away from clothing.

Know someone who has surgery scheduled?